The beverage’s taste ranges from the very soft, coming from the low and middle areas, to the sweet and complex citrus flavors of the higher areas of Pérez Zeledén and Coto Brus. Light aromas stand out, with fragrances similar to orange flowers and coffee jasmine. 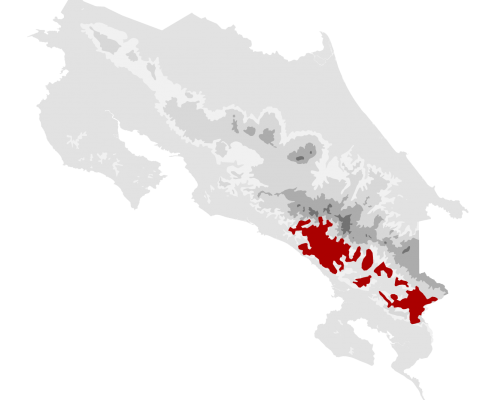 Brunca is a region located in the south of Costa Rica and comprises the Coto Brus, Buenos Aires and Pérez Zeledón cantons. In this region, coffee growing began in Pérez Zeledón by the end of the 19th century, as the first settlers came from the coffee-growing areas of the Central Valley and brought the deeply-rooted Costa Rican coffee culture.

Coffee growing in Pérez Zeledón takes place in a wide range of microclimates with altitudes ranging between 800 and 1,700 meters above sea level and an average temperature of 22 °C. These conditions allow for the production of coffee with features capable of satisfying the most demanding palates. The plantation area is estimated at 12,000 hectares, distributed in 4,200 farms; therefore, all resources generated are distributed among a large number of people.

The Coto Brus valley is located in the slopes of the Talamanca mountain range, which divides Costa Rica into the Pacific and the Atlantic regions. Coto Brus’ economy depends mostly on the growing of coffee: 2,600 coffee growers are registered and their harvest involves 75 communities. The Coto Brus region, on average, is at a higher altitude and is more humid, with temperatures between 18 and 26 °C.

The coffee region of Buenos Aires is mostly located at the base of La Amistad International Park, combining coffee production with rural tourism.